Life in Augusta: "That's where they have the Masters!"

Well, it seems like my average time between posts is about three months.  Maybe that will change someday... but I'm not making any promises!  I usually feel like I should "catch up" on posts, but I'm going to give up on that and just start with where we are right now... and we're in Augusta, GA!  We've been here since the end of June, so we are learning the area and making friends.  When we found out we were moving here we would usually get one of two responses when we told people we were going to Augusta.

After a few times, I learned that if they answered the first, that meant they had never been to Augusta.
The second response meant that they had been there for more than just Masters week. haha.


Yes, the Masters is here (I pass Augusta National almost every day)... and one week out of every year it is a tourist destination.  The other 51 weeks it is an old Southern river city during an economic crisis.  It wants to be revived, and has great potential, but is resistant to change.  People move here for two reasons:  Military (coming to Ft. Gordon) or Medical (coming to the medical school or to work at one of the many hospitals).  There are also those who have lived here forever (old money) and don't know why anyone would want to leave, those hit hard by the bad economy and struggling to make it, those trying to revive the downtown, and students at ASU or Paine College. I also don't know how many people have told me "yeah, we were only planning to stay here are year.  Now its been [insert number way beyond one]."  Oh, and there are the gypsies.  Yup, there's a gypsy community.  I still haven't seen it, but I will let you know when I do, haha!!

There isn't as much to do in Augusta as in the Triangle and there are no white sandy beaches like in Sarasota, but I'm learning to appreciate what is here.  After being in Florida for a year, I enjoy seeing a little bit more change of season... cool mornings and evenings.  I am teaching dance again and that is wonderful!   We took a day trip to Savannah/Tybee Island. 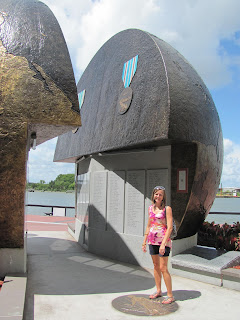 We enjoy spending time with Steve's co-workers, as well as friends we have made in church and in our neighborhood. Augusta is also close enough to drive back to NC for the weekend.  I was able to go up for both Joy and Julie's baby shower and I will be able to go up next week after my new niece is born!